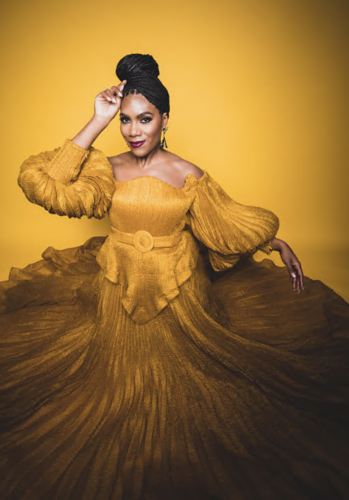 Yo-Yo Ma breaks the mold of classical music. Considered one of the greatest living cellists, he expands the catalog of cello music to include an array of works that aren’t restricted to only classical compositions. Over several decades, Ma has adapted and collaborated with other cultural traditions, genres and techniques. His opening night performance at Caramoor Center for Music and the Arts on June 18 with The Knights even includes an arrangement of the big band-era classic The Big Noise from Winnetka.

The concert ushers in a summer season at Caramoor that focuses its lens on “music as a collective cultural heritage for the entire world.” From Ma’s opening night event to an all-Beethoven season finale with the Orchestra of St. Luke’s, the season’s programming is decisively robust and diverse.

The season (June 18–Aug 19) offers opera, roots, jazz and more, but a spotlight has been put on “expanding the cannon of classical music,” according to Artistic Director Kathy Schuman. She adds: “Since Caramoor presents such a wide range of music genres, our programming is already quite diverse…This summer, we made a special effort to address this in the classical music realm as well.”

Both the opening and closing concerts, and many in between, take place in the Venetian Theater. The venue, suitable for the likes of Yo-Yo Ma, comfortably seats 1,500 outdoors under the safekeeping of its overhead tent. However, this is only one of several outdoor venues offered on the 80-acre campus in Northern Westchester. Several other venues offer distinct listening experiences for equally diverse music.

These are examples of the organization’s efforts to spotlight contemporary music. Schuman explains that Caramoor wants to amplify the voices of classical composers of color from the past, and she is also “a firm believer that music should not be a museum.” As a result, the summer season consistently includes the works of living composers.

Says Schuman: “These may not all make it into the canon alongside Beethoven, but they represent what is happening today and how music is constantly evolving.”

Of course, musicians don’t just show up at Caramoor’s front door. Schuman attends premieres at other venues across the nation, keeping up with the current music scene and finding acts that Caramoor’s audience will respond to.

For instance, after experiencing Raquel Acevedo Klein’s Polyphonic Interlace interactive sound installation in Manhattan, Schuman arranged for Klein to work with Caroline Shaw and Angélica Negrón for a collaborative performance on July 21. The trio will create new and improvised music in real time, with a combination of vocal, instrumental and electronic sounds.

Klein will also present Polyphonic Interlace as part of the “Soundscapes” event on June 5, which includes performances by beatboxer Dominic “Shodekeh” Talifero, percussive dancing duo Caleb Teicher and Nic Gareiss, and more. During this event, and all summer long, the annual sound art exhibition Sonic Innovations can be experienced for free.

However, “free” isn’t hard to come by at Caramoor. In addition to a number of pre- and post-performance talkbacks, various family-friendly community events occur throughout the season. One of these, Michael Gordon’s site-specific Field of Vision, takes place in yet another of Caramoor’s outdoor venues: an acoustic performance space called the Sunken Garden. This garden oasis, where music collaborates with nature, provides an immersive environment for the world premiere of this site-specific work. Field of Vision “tells stories about place and memory” as 40 percussionists perform on newly created instruments made from recycled metals and wood (July 24).

Another free event – a Juneteenth celebration to commemorate the anniversary of the emancipation of enslaved African Americans (see page A15) – takes place on Friends Field on June 19.

Friends Field is a large lawn on which a new stage was completed last summer. The Field makes guests feel at home with its “BYOS” policy – “bring your own seats.” During a “Concerts on the Lawn” series, the open air will carry notes of Las Cafeteras’s folk-infused Afro-Mexican vibes (June 23), lyrics from LADAMA, sung in Spanish, Portuguese and English (August 12), and cross-cultural influences from several other groups across the lawn throughout the summer.

Many loyal visitors would say that no summer season at Caramoor would be complete without the organization’s staple festivals, which take over the grounds with music from every corner of the campus. This year’s American Roots Festival, an all-day celebration of Americana, blues, folk and bluegrass, will close with an evening performance by Molly Tuttle & Golden Highway (June 25). Meanwhile, the Jazz Festival is headlined by vocalist Camille Thurman with Darrell Green Quartet, who will present a “Burt Bacharach Reimagined” program (July 30).

Schuman says that Caramoor’s distinct outdoor venues make them fortunate enough to have “a robust program that people can feel safe attending.” This accessibility is made evident in several ways. For one, a free shuttle runs to and from Caramoor from Metro North’s Katonah station before and after every concert. Additionally, Caramoor recently announced a Hudson Valley Summer Arts Pass with three other regional arts organizations – Jacob Burns Film Center, Historic Hudson Valley and Hudson Valley Shakespeare Festival. The discounted ticket bundle, available through June 20, makes experiencing the arts more affordable to those whose interests are piqued by Caramoor’s diverse summer season.