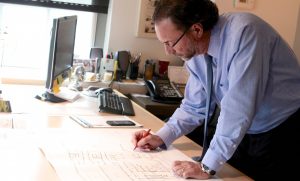 In downtown White Plains, located at the corner of Martine and Mamaroneck Avenues, ArtsWestchester is snuggled between vibrant shops, malls and apartment buildings. However, inside its walls, the colors of White Plains come to life. Thirty creative tenants call ArtsWestchester “home” for their artistic ventures, establishing themselves as experts in their craft, whether fabric art, design, photography or sculpting.

Sullivan Architecture is one of these tenants, having occupied space in the building for nearly two decades. In fact, the firm headlined the restoration of the historic landmark building when it was purchased by ArtsWestchester in 1998. Over the years, the firm has helped ArtsWestchester to develop plans for its building, including the remodeling of its first and second floor galleries and ninth floor conference space.

John Sullivan, Principal and Founder of Sullivan Architecture, is an esteemed professional in his industry. His firm has used its artistic vision and business expertise to beautify its local community, including current projects like the new YMCA early learning center and the North White Plains Community Center. With his team’s involvement in these projects, Sullivan has observed growing trends and has hope for the future: “Westchester continues to be a desirable community for both living and business, even during the pandemic.” This insight has allowed him and his team to remain at the forefront of future development in the County.

Behind the blueprints and floorplans, Sullivan’s artistic vision is put to work on every project that comes across the firm’s drafting tables. “Our staff thrives [when it comes to] addressing the needs of each client individually through creative design solutions.” It is the solid foundation of a team such as this that has thrust Sullivan Architecture into 2021, with future projects like the Pound Ridge Fire Department.

Despite the work-from-home policies implemented last year, Sullivan’s team has been gradually visiting the office, acknowledging the importance of team collaboration. The central location of their office in ArtsWestchester’s 31 Mamaroneck Avenue building, allows the team to gather in their newly designed offices, order from nearby restaurants that were all but abandoned during the pandemic, and support its community in finding a way to return to normal. Sullivan Architecture moved into the ArtsWestchester building two decades ago and “plan[s] to stay there for another four decades, at least.”