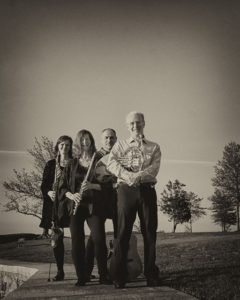 Join Pelham Art Center for a Thursday evening gallery concert with Westchester-based group Angels in the Chamber, March 12, 2020 at 7:00PM.

About Angels in the Chamber: The Music of Angels in the Chamber is unique under the heavens. Featuring Garry Novikoff (piano/guitar/lead vocals), Pamela Sklar (flute/alto flute), Enid Blount Press (clarinet/bass clarinet), and Marc Wager (French horn), the band weaves elements of rock, pop, classical, improvisational and atmospheric music into a highly original genre all its own. Their material co-features originals as well as inventive covers from the 1960s and 70s – the golden age of what was called art rock or progressive rock. They also go back in time to reinvent and re-imagine works from the Civil War era.

Angels in the Chamber were featured finalists in the WNYC Battle of the Boroughs Concert at the Greene Space hosted by WQXR DJ Terrance McNight and were also featured on Robert Sherman’s radio show Woody’s Children on WFUV in New York. Other recent performances include Nyack and New York City clubs and New Rochelle venues. Released in December, 2018, their debut recording Angels in the Chamber is fast-gaining recognition in Westchester and beyond.

Pelham Art Center is pleased to host this evening of extraordinary music in an intimate gallery setting. All four members of Angels in the Chamber call New Rochelle home, and look forward to sharing their unique sound with the local community. Guests are welcome to stay after the performance to enjoy wine, meet the musicians, and view the gallery exhibition “Pelham Art Center: 50 Years.” Gallery concerts are open to the public. There is a suggested $10 donation to Pelham Art Center. Pelham Art Center is located at 155 Fifth Avenue, Pelham.

About Angels in the Chamber Members:

Garry Novikoff is a multi-award winning, multi-genre singer/songwriter and educator. His critically acclaimed songs have been heard on radio stations across the country; his marriage equality dance anthem It’s Our Time earned him two Outmusic Award nominations, including Single of the Year, and Humanitarian Songwriter of the Year. He is a recipient of an ASCAP Foundation Award for his children’s music. In 2011, The Duplex Theater mounted The Songs of Garry Novikoff, a revue which lead to a MAC Award nomination (Manhattan Association of Cabarets and Clubs). In 2015, Garry had the great honor of being nominated for a TONY Award for his work as a musical theater educator in the New York City school system. For more information visit garrynovikoff.com

Pamela Sklar collaborates as a flutist and composer playing a multitude of musical styles. Her performances include all of New York’s major halls to tours throughout the USA, Japan, Mexico, Canada, France and Morocco; solo appearances, national television and/or recordings with artists including Claude Bolling, Dave Brubeck, Tony Bennett, Lady Gaga, Paul Simon, tenor Andrea Bocelli, Alan Hovhaness, and Aretha Franklin in orchestras for the GRAMMY Awards. A published composer of chamber music, Pamela is a 2019-2020 ArtsWestchester grant recipient for her Arts Initiative project Words into Music which will be performed on April 11th in Mount Vernon. For more information visit pamelasklar.com

Enid Blount Press, clarinet and bass clarinet, has a diverse musical career performing and teaching in the New York area. She has performed as a clarinetist at many of the major performance halls in New York: Carnegie Hall, Lincoln Center, Merkin Recital Hall, as well as at numerous other national and international venues. A founding member and clarinetist/bass clarinetist of the progressive chamber rock group Angels in the Chamber, Enid enjoys teaching clarinet, saxophone and piano as well as music classes. She lives in New Rochelle with her family.

Pelham Art Center is a non-proﬁt educational and cultural institution committed to providing public access to see, study and experience the arts, foster lifelong arts appreciation and thereby strengthen the community.  The Art Center was founded in 1970 and now serves more than 16,000 people each year. These events and programs are made possible, in part, by the ArtsWestchester with funds from Westchester County Government. Pelham Art Center also receives funding from: New York State Council on the Arts, A State Agency; Westchester Community Foundation; Pelham Community Members and Annual Fund Donors.