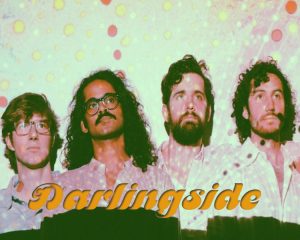 The band, which was named Artist of the Year by Folk Alliance International in 2015, has garnered rave reviews from the press, including the Boston Herald, which said about them, “Darlingside are doing something new in pop music, which is kind of astonishing this late in the game (ground the Beach Boys, Beatles, Joni Mitchell, Pink Floyd, David Bowie, Talking Heads, Prince, Phish, and Radiohead didn’t cover is hard to find.)” Rolling Stone described the group’s music as locomotive folk pop confections so richly executed it’s hard to tell if it’s one voice or 12.”

Don Mitchell, Auyon Mukharji, Harris Paseltiner, and David Senft, the band’s four vocalists and multi-instrumentalists, construct every piece collaboratively, pooling ideas so that each song bears the imprint of four different writing voices. Playful vocal permutations swing from four-part unison to CSNY-inspired group harmonies, underpinned by rich, carefully crafted soundscapes. The final product threads the collective memory of the four songwriters, nodding to the music of their parents’ generation while establishing a sound that is all their own.

Tickets for this concert, which is produced by Common Ground Concerts, one of Irvington Town Hall Theater’s Arts Partners, range from $25-$35. For more information visit: www.irvingtontheater.com

About Common Ground: Common Ground Concerts is the producer the long-standing Common Ground Coffeehouse at the First Unitarian Society of Westchester at 25 Old Jackson Avenue, outside of Hastings-on-Hudson NY. Four times a year, it also presents concerts at historic Irvington Town Hall Theater at 85 Main Street in Irvington NY, and occasionally partners with community groups and non-profits to produce concerts in other locations as well.