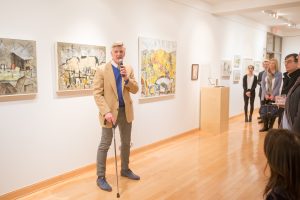 On Thursday, February 1st, OSilas Gallery at Concordia College held an opening reception for its new exhibition, The Pinajian Discovery: An Artist’s Life Revealed.  Over 150 people from near and far attended the reception to see the abstract expressionist landscapes of American artist Arthur Pinajian (1914-1944) and to hear the remarks of the exhibition’s curator, noted art historian Peter Hastings Falk. The Pinajian Discovery: An Artist’s Life Revealed will be on show in OSilas Gallery through March 17 and is free and open to the public.

OSilas Gallery is pleased to be able to showcase the work of this talented recluse, whose obsession with art—creating it, thinking about it, writing about it—consumed his life. Pinajian devoted himself to art and created thousands of works on canvas, paper and any other surface on which he could paint or draw, yet it appears he exhibited and sold his paintings only rarely. When he died, he left behind stacks of canvases in a dirt-floor garage and the attic of his sister’s home in Bellport, Long Island. The artist had left instructions for his collection to be discarded in the town dump, but fortunately Lawrence E. Joseph bought the Bellport cottage in 2006 after Pinajian’s sister died and rescued the collection. Since its salvation, Pinajian’s work has garnered attention by international media—from articles in The New York Times and The Telegraph to a segment on Good Morning America—and been admired by art historians and collectors alike.

Ten years ago, Professor William Innes Homer (1929-2012), a former Chair of the Association of Historians of American Art, was asked by Mr. Joseph to examine a large collection of abstract landscape and figurative paintings by the highly gifted hermit artist. Soon a team of art historians was conducting research into the life and art of Arthur Pinajian. Homer stated, “When Pinajian hits the mark, especially in his abstractions, he can be ranked among the best artists of his era.” He concluded, “[Pinajian’s] life is, above all, a model for those who feel that they must follow their calling despite a lack of public acceptance . .  . When all is said and done, this oeuvre is important both because it represents an artist’s life in its totality and because within it is found a prize legacy that will endure for posterity.”

Pinajian grew up in an Armenian-American community in West Hoboken (Union City), New Jersey. He was a self-trained cartoonist and during the Great Depression became a pioneer in a new medium:  the comic book.  He wrote and drew for a number of publishers, including Marvel, and in 1940 created “Madam Fatal,” the first cross-dressing superhero, for Crack Comics.  Pinajian fought in World War II, and after he returned to the United States he decided to leave cartooning in the past and to dedicate himself to becoming a modernist artist.  He used the G.I. Bill to enroll in the Art Students League in New York City to hone his craft.  For more than 20 years, Pinajian spent half the year living with his sister in New Jersey and the other half living and painting in Woodstock, where the Art Students League had its summer school and there was a thriving art community.  In later years, Pinajian moved to Bellport with his sister, who financially supported him much of his life.

The Pinajian Discovery: An Artist’s Life Revealed features 37 of Pinajian’s abstract expressionist landscapes from both Woodstock and Bellport, the two primary locations where he painted, dating from 1958 to 1994. Many of the works on show are available for acquisition.

About OSilas Gallery at Concordia College

Previous post:
« From a Dirt Floor Garage to the White Walls of OSilas Gallery: The Works of Abstract Expressionist Arthur Pinajian
Next post:
DEPARTING SKIES: Serdar Arat Exhibition to open at OSilas Gallery »